I am particularly drawn to books which have quirky and unusual titles.  I (sadly) tend to spot less of these in bookshops than I do when browsing book websites, and have so many of them on my to-read list.  I thought that it might be a fun idea to gather together ten wonderfully titled books, and display them alongside their synopses.  I have read a couple of these, and the rest are either on my wishlist, or ones which I came across whilst compiling this post.

‘Beginning with Yuka, a 39,000 year old mummified woolly mammoth recently found in the Siberian permafrost, each of the 16 essays in Animals Strike Curious Poses investigates a different famous animal named and immortalized by humans. Modeled loosely after a medieval bestiary, these witty, playful, whipsmart essays traverse history, myth, science, and more, bringing each beast vibrantly to life.’
2. Niagara Falls All Over Again by Elizabeth McCracken ****
‘Spanning the waning years of vaudeville and the golden age of Hollywood, Niagara Falls All Over Again chronicles a flawed, passionate friendship over thirty years, weaving a powerful story of family and love, grief and loss. In it, McCracken introduces her most singular and affecting hero: Mose Sharp — son, brother, husband, father, friend … and straight man to the fat guy in baggy pants who utterly transforms his life.‘

3. The Woman Who Gave Birth to Rabbits by Emma Donoghue
‘Donoghue finds her inspiration for these wry, robust tales in obscure scraps of historical records: an engraving of a woman giving birth to rabbits; a plague ballad; surgical case notes; theological pamphlets; an articulated skeleton. Here kings, surgeons, soldiers, and ladies of leisure rub shoulders with cross-dressers, cult leaders, poisoners, and arsonists.  Whether she’s spinning the tale of an Irish soldier tricked into marrying a dowdy spinster, a Victorian surgeon’s attempts to “improve” women, a seventeenth-century countess who ran away to Italy disguised as a man, or an “undead” murderess returning for the maid she left behind to be executed in her place, Emma Donoghue brings to her stories an “elegant, colorful prose filled with unforgettable sights, sounds and smells” (Elle). Here she summons the ghosts of those women who counted for nothing in their own day, but who come to unforgettable life in fiction.‘
4. Life is a Circus Run by a Platypus by Allison Hawn
‘Has being late to work due to dancing clowns ever been a problem for you? Have you ever had to defend yourself against a giant iguana? Does the overture to The Music Man make you violently twitch? In Life is a Circus Run by a Platypus readers are immersed into what it would be like to live every day as if a herd of ballerinas were chasing you, without the inconvenience of actually having to run. This collection of truly bizarre short stories taken from the author, Allison Hawn’s, life takes one across the world and into the strangest crevices of civilization. The lessons learned through her adventures might very well save the reader if they too ever have to face birthing a cow, calming distraught technical support or death by furniture.‘
5. The War of Don Emmanuel’s Nether Parts by Louis de Bernieres ** 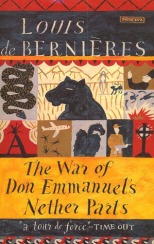 ‘When the spoilt and haughty Dona Constanza tries to divert a river to fill her swimming pool, she starts a running battle with the locals. The skirmishes are so severe that the Government dispatches a squadron of soldiers led by the fat, brutal and stupid Figueras to deal with them.  Despite visiting plagues of laughing fits and giant cats upon the troops, the villagers know that to escape the cruel and unusual tortures planned for them, they must run. Thus they plan to head for the mountains and start a new and convivial civilisation.‘
6. From the Mixed-Up Files of Mrs Basil E. Frankweiler by E.L. Konigsburg ****
‘When suburban Claudia Kincaid decides to run away, she knows she doesn’t just want to run from somewhere, she wants to run to somewhere — to a place that is comfortable, beautiful, and, preferably, elegant. She chooses the Metropolitan Museum of Art in New York City. Knowing her younger brother Jamie has money and thus can help her with a serious cash-flow problem, she invites him along.  Once settled into the museum, Claudia and Jamie find themselves caught up in the mystery of an angel statue that the museum purchased at auction for a bargain price of $225. The statue is possibly an early work of the Renaissance master, Michelangelo, and therefore worth millions. Is it? Or isn’t it?  Claudia is determined to find out. Her quest leads her to Mrs. Basil E. Frankweiler, the remarkable old woman who sold the statue, and to some equally remarkable discoveries about herself.‘

7. The Man Who Mistook His Wife For a Hat by Oliver Sacks ****
‘In his most extraordinary book, “one of the great clinical writers of the twentieth century” (The New York Times) recounts the case histories of patients lost in the bizarre, apparently inescapable world of neurological disorders. Oliver Sacks’s The Man Who Mistook His Wife for a Hat tells the stories of individuals afflicted with fantastic perceptual and intellectual aberrations: patients who have lost their memories and with them the greater part of their pasts; who are no longer able to recognize people and common objects; who are stricken with violent tics and grimaces or who shout involuntary obscenities; whose limbs have become alien; who have been dismissed as retarded yet are gifted with uncanny artistic or mathematical talents.‘
8. The Sound of a Wild Snail Eating by Elisabeth Tova Bailey ****
‘As a long illness keeps her bedridden, Elisabeth Tova Bailey becomes intrigued by a snail that has taken up residence in a pot plant next to her bed. Her fascination with the snail’s strange anatomy and its midnight wanderings kindles an interest that saves her sanity.  The Sound of a Wild Snail Eating is an inspiring and intimate story of resilience, and an affirmation of the healing power of nature. It reminds us of how a small part of the natural world can illuminate our existence and deepen our appreciation of what it means to be fully alive.‘

9. The Elegance of the Hedgehog by Muriel Barbery ****

‘A moving, funny, triumphant novel that exalts the quiet victories of the inconspicuous among us.  We are in the center of Paris, in an elegant apartment building inhabited by bourgeois families. Renée, the concierge, is witness to the lavish but vacuous lives of her numerous employers. Outwardly she conforms to every stereotype of the concierge: fat, cantankerous, addicted to television. Yet, unbeknownst to her employers, Renée is a cultured autodidact who adores art, philosophy, music, and Japanese culture. With humor and intelligence she scrutinizes the lives of the building’s tenants, who for their part are barely aware of her existence.  Then there’s Paloma, a twelve-year-old genius. She is the daughter of a tedious parliamentarian, a talented and startlingly lucid child who has decided to end her life on the sixteenth of June, her thirteenth birthday. Until then she will continue behaving as everyone expects her to behave: a mediocre pre-teen high on adolescent subculture, a good but not an outstanding student, an obedient if obstinate daughter.  Paloma and Renée hide both their true talents and their finest qualities from a world they suspect cannot or will not appreciate them. They discover their kindred souls when a wealthy Japanese man named Ozu arrives in the building. Only he is able to gain Paloma’s trust and to see through Renée’s timeworn disguise to the secret that haunts her. This is a moving, funny, triumphant novel that exalts the quiet victories of the inconspicuous among us.‘
10. Let’s Explore Diabetes with Owls by David Sedaris
‘A guy walks into a bar car and…  From here the story could take many turns. When this guy is David Sedaris, the possibilities are endless, but the result is always the same: he will both delight you with twists of humor and intelligence and leave you deeply moved.   Sedaris remembers his father’s dinnertime attire (shirtsleeves and underpants), his first colonoscopy (remarkably pleasant), and the time he considered buying the skeleton of a murdered Pygmy.  With Let’s Explore Diabetes with Owls, David Sedaris shows once again why his work has been called “hilarious, elegant, and surprisingly moving” (Washington Post). ‘

Have you read any of these?  Which are your favourite book titles?

2 thoughts on “Books with Wonderful Titles”