I have wanted to read Loung Ung’s memoir, First They Killed My Father, for years, and was able to schedule it as the Cambodia stop on my Around the World in 80 Books challenge.   This work, which details Ung’s experiences with the Cambodian genocide, is subtitled ‘A daughter of Cambodia remembers’, and is an incredibly poignant record of a young life spoiled, first by civil war, and then by a dictatorship.

Spending her formative years, and losing half of her family, during Pol Pot’s Khmer Rouge seems as vivid for Ung now as it was at the time.  The second youngest of seven children born to a high-ranking government official, Ung led a prosperous life in Phnom Penh.  When the Khmer Rouge Army marched into the city in April 1975, Ung and her family had to flee, moving from one village to another in order to keep hidden; she was just five years old.  Later, the family had to split up almost entirely in order to enable them a stronger chance of survival.  Through various means – ‘execution, starvation, disease, and forced labour’ – the Khmer Rouge is thought to have killed almost a quarter of Cambodia’s population, estimated at a horrifying 2 million citizens. 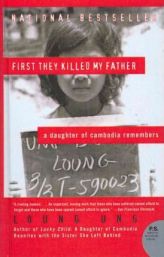 First published in 2000, Ung begins her recollections at the point of being driven out of her home in 1975.  The memoir spans just five years, but is incredibly tumultuous.  Ung has chosen to present her memoir using the present tense, which gives it a real sense of urgency.  From the very beginning, Ung’s childish innocence of the time shines through: ‘Pa always defends me – to everybody.  He often says that people just don’t understand how cleverness works in a child and that all these troublesome things I do are actually signs of strength and intelligence.  Whether or not Pa is right, I believe him.  I believe everything he tells me.’  The prose continues in this rather simplistic manner throughout; as she tells her story, Ung seems to inhabit the voice of her childhood.

The cultural information which Ung imparts alongside her own memoirs is fascinating.  There is a finely honed sense of place and atmosphere throughout.  When they are forced to flee, Ung makes clear that every family, no matter their position or standing, wwere driven out of cities all over Cambodia over the course of several days: ‘People pour out of their homes and into the streets, moving very slowly…  Everywhere, people scream their good-byes to those who choose to stay behind; tears pour from their eyes…  the world moves in hurried confusion from the city.’  The landscape changes rapidly as the family leave Phnom Penh in their truck: ‘… the wide, paved boulevard gives way to windy, dusty roads that are no more than wagon trails.  Tall elephant grass and prickly, brown brush have replaced Phnom Penh’s blooming flowers and tall trees.’

Despite her age, Ung is able to understand the roots of what drives her family away from all they know: ‘Keav [her older sister] tells me the soldiers claim to love Cambodia and its people very much.  I wonder then why they are this mean if they like us so much.  I cheered for them earlier today, but now I am afraid of them.’  Her family live in constant fear, and this trickles down to Ung.  She writes: ‘At five years old, I am beginning to know what loneliness feels like, silent and alone and suspecting that everyone wants to hurt me.’  The young Ung has so much strength and determination, which is incredible given the conditions she is forced to live under.

First They Killed My Father is harrowing, and incredibly moving.  Ung describes, along with her own experiences, those things which affected all of her fellow Cambodians.  So much changed; religion was banned, and children were made to work instead of pursuing their education.  People were made to live under horrendous conditions: ‘The population in the village is growing smaller by the day.  Many people have died, mostly from starvation, some from eating poisonous food, others killed by soldiers.  Our family is slowly starving to death and yet, each day, the government reduces our food ration.  Hunger, always there is hunger.  We have eaten everything that is edible, from rotten leaves on the ground to the roots we dig up.’

As time passes, Ung becomes almost entirely desensitised to the death and suffering around her.  She does, however, still retain some knowledge of the wonder of the world, which she was familiar with during her time in Phnom Penh: ‘The next evening, while sitting with [her brother] Kim outside on the steps of our hut, I think how the world is still somehow beautiful even when I feel no joy at being alive within it.  It is still dark and the shimmering sunset of red, gold, and purple over the horizon makes the sky look magical.  Maybe there are gods living up there after all.  When are they going to come down and bring peace to our land?’  First They Killed My Father is a startling and important record of a ruined childhood, which I would urge everyone to read.