I have wanted to read Tarjei Vesaas’ work for years, and as soon as I began his novel, The Ice Palace, I knew that I was in for an absolute treat.  It is one of those rare books which I have heard only praise for.  Doris Lessing hits the nail on the head in her review of The Ice Palace; she writes: ‘How simple this novel is.  How subtle.  How strong.  How unlike any other.  It is unique.  It is unforgettable.  It is extraordinary.’  The Times is also effusive in its praise, writing: ‘It is hard to do justice to The Ice Palace…  The narrative is urgent, the descriptions relentlessly beautiful, the meaning as powerful as the ice piling up on the lake.’  Its own blurb compares it to an Ingmar Bergman film, for its ‘sombre and Scandinavian’ feel. 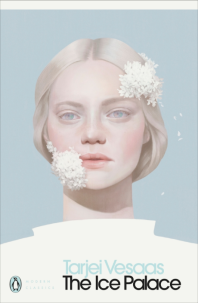 I read.  The Ice Palace is set in Vesaas’ homeland of rural northern Norway.  Eleven-year-old Unn, one of our protagonists, has just moved in with her aunt.  She ‘strikes up an unlikely friendship at school with a boisterous classmate, Siss, and an unusual bond develops between them.’

The pair barely speak at school, but Siss walks to Unn’s one evening, and the girls confess their feelings for one another.  Both recognise the intimacy forming between them, but are unsure as to how to be with one another following the revelation.  They do not understand the intensity which they feel, or how to control it.  Unn feels unable to face her friend the following day.  At this time, Vesaas writes: ‘Tomorrow it would be different, but not just now.  She could not look into Siss’s eyes today.  She thought no further; the idea took hold of her with compelling force.’  Instead of trudging through the winter darkness to school, she takes a lone trip to the ice palace, which has formed beneath a local waterfall.

Vesaas immediately demonstrates the bleak but startling beautiful setting: ‘It was really only afternoon, but already dark.  A hard frost in late autumn.  Stars, but no moon, and no snow to give a glimmer of light – so the darkness was thick, in spite of the stars.  On each side was the forest, deathly still, with everything that might be alive and shivering in there at that moment.’  Despite its bleakness, The Ice Palace is filled with some quite charming details.  When Unn first reaches the lake near to the ice palace, for example, Vesaas writes: ‘The ground was made up of heather and tussocks of grass and, like everything else, shone silver with rime in the slanting sunlight.  Unn jumped from tussock to tussock in this fairyland.  Inside her satchel her books and sandwich box jumped up and down too.’

Much of Vesaas’ writing is given over to the landscape within the more pivotal moments of The Ice Palace.  His descriptions of ice and snow are varied, and startlingly beautiful.  When she reaches the ice palace, he writes, for instance, ‘Unn looked down into an enchanting world of small pinnacles, gables, frosted domes.  Soft curves and confused tracery.  All of it was ice, and the water spurted between, building it up continually.  Branches of the waterfall had been diverted and rushed into new channels, creating new forms.  Everything shone.’  From her vantage point at the bottom of the iced waterfall, Unn is made aware of the sheer scale of the ice palace: ‘From here the ice walls seemed to touch the sky; they grew as she thought about them.  She was intoxicated.  The place was full of wings and turrets, how many it was impossible to say.  The water had made it swell in all directions, and the main waterfall plunged down in the middle, keeping a space clear for itself.’

The Ice Palace, which was first published in Norway in 1963, is described as having ‘prose of a lyrical economy that ranks among the most memorable achievements of modern literature’.  I have to agree; rarely have I read a novel as fragile and beautiful as this one.  Vesaas is introspective and understanding when exploring the impact which Unn’s disappearance has on both her loved ones, and on the community as a whole.  The sense of place which Vesaas and his characters live within sprang to life before my very eyes, and has left me longing to visit Norway again.  The Ice Palace is immensely beguiling; it is a breathtaking and heartbreaking novel, which I would urge all of those who enjoy literary fiction to read.