I was given a copy of Sarah Perry’s The Essex Serpent for Christmas, and came to it with rather high hopes, as I know that a lot of fellow readers have adored it.  It was chosen as the Waterstones Book of the Year in 2016, and has also been selected for innumerable ‘best of’ lists.  I was rather underwhelmed with Perry’s debut novel, After Me Comes the Flood; I will be posting my archived review of this tome tomorrow. 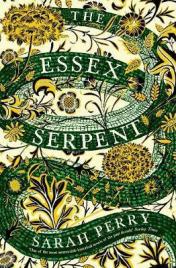 The Essex Serpent begins in London in 1893.  Cora Seaborne has been recently widowed, and decides to move to Colchester in Essex with her young son, ‘black-haired, silent’ Francis.  She hears rumours almost as soon as she has relocated about ‘the Essex serpent’, a creature of local folklore which has been said to have returned to roam the marshes.  The serpent is described as ‘a great creeping thing, as they tell it, more dragon than serpent, as content on land as in water, that suns its wings on a fair day.’  After some time, Cora decides to set off upon the serpent’s trail.  This is only one thread of the novel; it is set at a time of great change, and Perry effectively contrasts Cora’s love of science, and the scientific advances of the age, with a local vicar named William Ransome, who is focused wholly upon his faith.  The blurb says that the novel is, ‘above all, a celebration of love in all its incarnations, and of what we share even when we disagree.’

The historical settings come to life from the beginning, and were, for me, a real strength of the novel.  In her opening chapter, which begins on New Year’s Eve, Perry writes: ‘One o’clock on a dreary day and the time ball dropped at the Greenwich Observatory.  There was ice on the prime meridian, and ice on the rigging of the broad-beamed barges down on the busy Thames.  Skippers marked the time and tide…  Time was being served behind the walls of Newgate jail, and wasted by philosophers in cafes on the Strand.’  Had this thread of the passing of time been included throughout the novel, I feel as though it would have drawn the whole together; rather, whilst beautifully written, and certainly effective at evoking the scene, it feel as though this prologue was separate from the rest of the novel.  The quality of Perry’s writing, in my opinion, was inconsistent; it felt very polished in the prologue, and in selected chapters later on, but due to the pace of the novel proper, it was plodding in other places.  The prose on its own was often lovely, but there was a strange density to it, and I did not find The Essex Serpent a very easy book either to read, or to immerse myself within, in consequence.

Perry did capture Cora’s new position in life, and the complexity of feeling which struck her when her abusive husband, Michael, died: ‘The sensation was decently suppressed, but all the same she could name it: it was not happiness, precisely, nor even contentment, but relief.  There was grief, too, that was certain, and she was grateful for it, since however loathed he’d been by the end, he’d formed her, at least in part – and what good ever came of self-loathing?’  Of his father’s death, Francis’ feelings are rather less predictable: ‘That his father had died struck him as a calamity, but one no worse than the loss of one of his treasures the day before (a pigeon’s feather, quite ordinary, but which could be coiled into a perfect circle without snapping its spine).’

Natural history as an element has been used very well within The Essex Serpent, and this was one of my favourite parts of the book, snaking, as it did, in and out of various chapters.  The characters were problematic, however; Cora is the main focus of the novel, but I do not feel as though I knew her satisfactorily come the end.  No single character within The Essex Serpent feels wholly realistic; for me, Francis and his behaviour would have been a much more interesting focus had it been elaborated upon more often.

Whilst I liked the core idea, and am fascinated with the period of history which Perry has focused upon, I found The Essex Serpent to be rather a slow-going novel.  I did not feel as though the whole came together satisfactorily, certainly not as well as it could have had certain plotlines been tightened up slightly, or focused upon a little more.  I felt something of a detachment toward the characters, and the entire novel did not feel as though it was quite a consistent work; for me, the prologue and end chapters held a lot more promise than the rest of the novel.  Whilst I admire the way in which Perry has completely embraced Victoriana, and has reflected the literature of the period in stylising her own sentences, The Essex Serpent did not read as fluently or fluidly as it could have done.