Meik Wiking’s The Little Book of Hygge: The Danish Way to Live Well is the fourth title on the Danish phenomenon of hygge which I have read to date.  I adore the whole concept, and thought that snuggling down with this on a Sunday evening when I felt unwell would be rather comforting; it was. 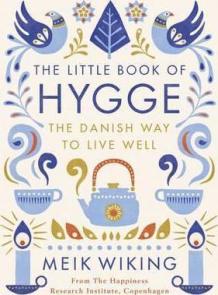 Wiking works at the Happiness Research Institute in Denmark, an independent think-tank ‘focusing on well-being, happiness and quality of life’, which aims to ‘work towards improving the quality of life of citizens across the world’.  Essentially, Wiking looks into what makes us happy.  In his book, he has written extensively about different happiness surveys, and how hygge contributes to the Danes being consistently voted the happiest nation on earth.

I read one review of The Little Book of Hygge which writes that it adds little to the slew of existing books.  I thought that I would challenge this viewpoint, which I found to be false, by formulating a list of all of the things about hygge that Wiking has taught me.  Here goes…

The Little Book of Hygge is very soothing, and includes many lists of ways in which hygge can be incorporated into any life.  The illustrations and photographs are a really nice touch, and the whole has been peppered with interesting charts and facts.  The ‘hygge dictionary’ is also lovely, and the structure, which is broken into different chapters following such things as ‘Food and Drink’ and ‘Clothing’, works marvellously.  The idea of making a hygge survival kit is absolutely darling.  In all, I would say that Wiking does add to the concept of hygge, and the books which already exist about it; it would be a lovely addition to any bookshelf, or an incredibly thoughtful gift for a dear friend.