Translated from its original Russian by Antonina W. Bouis, Sergei Dovlatov’s The Suitcase fits wonderfully within my Reading the World Project.  I had never read any Dovlatov before picking this novella up in the Books for Amnesty shop in Cambridge, but was intrigued by its premise: ‘Several years after emigrating from the USSR, the author discovers the battered suitcase he had brought with him gathering dust at the back of a wardrobe. As he opens the suitcase, the seemingly undistinguished items he finds inside take on a riotously funny life of their own as Dovlatov inventories the circumstances under which he acquired them’. 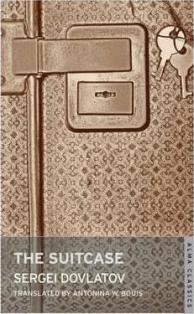 Dovlatov’s books were banned in Russia, and he was forced into a life of exile in the United States.  The Suitcase, published for the first time in 1986 in Russia, and in English translation in 1990, is perhaps one of the most modern male-written Russian books which I have read, as I tend to plump for the likes of Dostoevsky and Tolstoy.  The Suitcase is a comic work, ‘overlaid with Dovlatov’s characteristically dark-edged humour’.  On the book’s blurb, in fact, he is deemed ‘one of the finest satirists of the twentieth century’.

The Suitcase has been simply but effectively split into sections which detail all of the things found in the suitcase, from ‘The Finnish Crepe Socks’ to ‘The Winter Hat’.  This essentially forms a series of interconnected short stories.  The narrator of the piece is named Sergei Dovlatov too, but it is not entirely certain whether this is a work with autobiographical echoes in terms of the existence of such a suitcase and its contents.

We learn quite a lot about Dovlatov the character from the stories which we are told.  After he has been released from prison at the outset of the work, he gives a short appraisal of his life, and where he finds himself: ‘I almost wept with self-pity.  After all, I was thirty-six years old.  Had worked eighteen of them.  I earned money, bought things with it.  I owned a certain amount, it seemed to me.  And still I only needed one suitcase – and of rather modest dimensions at that’.

Dovlatov is amusing and sardonic throughout, although some of the chapters are certainly funnier than others.  He mocks the Communist regime, and the way of life which had to be adhered to when he was young and living in Russia: ‘As a schoolboy I liked to draw the leaders of the world proletariat – especially Marx.  Just start smearing an ordinary splotch of ink around and you’ve already got a resemblance…’.

The Suitcase has been written and translated well, but I did not enjoy it as much as others seem to.  The writing is more matter of fact than pretty, and the descriptions are cursory when talking about anything other than the items within the suitcase.  Dovlatov seems to subscribe to the ‘tell rather than show’ method of prose writing.  It is rather a quick read, and a thoughtful one at times, but whilst there is a social commentary and historical details – black marketeering, politics, figureheads, industry, Communism and Capitalism, and propaganda, to name just a few – running throughout the book, there is not the depth to it which I was expecting there to be.  There is profundity at times, but I feel that this could have been used to better effect had the writing sparkled more.

There is not much of a geographical sense of place within the pages of The Suitcase, which would have added depth and context to the whole.  It is also quite dialogue heavy, something which I’m not that keen on in stories unless it’s done incredibly well.  Whilst it does hold interest for those fascinated by Russian history, I have discovered that I am far more a fan of the descriptive variety of Russian literature, by the likes of Dostoevsky, Pushkin, and Bulgakov.  The Suitcase does present a series of stories which circle around a clever central idea, but I found that I liked the idea of it more than its execution.

One thought on “Reading the World: ‘The Suitcase’ by Sergei Dovlatov ***”