D.E. Stevenson’s The Two Mrs Abbotts was first published in 1943, and has recently been reissued by Persephone Books.  Stevenson was an incredibly prolific author, and had over forty novels published during her writing career.  The Two Mrs Abbotts is the third instalment in the books which feature Miss Buncle, both of which have also been published by Persephone.  There has been no introduction included here; instead, readers are ‘referred’ to the first two volumes.

The Two Mrs Abbotts opens in Archway House in the village of Wandlebury in an unnamed county, where nursery nurse Dorcas – lovingly called ‘Dorkie’ by her young charges – is looking after Mrs Barbara Abbott’s children, Simon and Fay: ‘She was thinking how odd it was that children grew up so quickly and grown-up people remained much the same’.  The Abbotts’ home has been partially turned into a school for wartime children, or ‘Vack-wees’, as Fay rather adorably calls them.  Throughout, both children have been written about in such a way that their characters are built up in a believable manner.  Simon, for example, professes that he is ‘Four years older than the war…  I can even remember bananas – and cream’.  Later on, he is found ‘hopping and skipping and talking hard as he always did except when he felt unwell’.

One of the first events in the book is the arrival of Sarah Walker, a lecturer travelling around the country on behalf of the Red Cross.  Sarah is an old friend of Barbara’s, and they have not seen one another since the latter left the village under a cloud of sorts: ‘She had vanished in the night…  She had been obliged to go, of course, because she had written two very amusing books all about her neighbours and their little peculiarities, and her neighbours had not appreciated their portraits – quite the reverse’.  With these foundations, Barbara has gone on to marry her publisher, Arthur Abbott.

The family in their entirety is trying to cope as best they can in wartime.  Arthur’s nephew is away fighting, and his house has been taken over by a whole battalion of soldiers ‘like a crop of dragon’s teeth’.  His young wife Jerry – the other Mrs Abbott of the book’s title – has been left behind and tries to keep herself as busy as she possibly can, spending much of her time visiting Barbara and the children, and finding tenants for the small cottage which sits beside her house.  The lives of all are filled with daily duties, such as hosting tea parties for acquaintances in the village, having evacuee families to stay, and finding innovative ways of making recipes, due to the majority of the correct ingredients having been made unobtainable due to Second World War rationing. 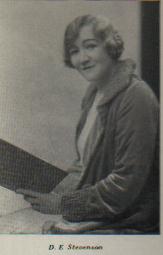 Stevenson’s writing is rather amusing throughout.  A young man from the village who has joined the RAF and is currently at home on sick leave, is said to have ‘cultivated a small moustache which reminded one just a little of Hitler’.  His lady friend Pearl Besserton, a woman whom nobody really likes, ‘looked as if she had stepped straight off the stage of a third-rate music hall without having taken the trouble to remove the greasepaint’.  The novel is also, as one would expect, so very British.  There is a chapter where Barbara goes to the village’s annual bazaar, to which she ‘had set out with the benevolent intention of buying something at every stall’.  She then feels obliged to purchase a very ugly pair of vases which have been saved for her by a woman who is running one of the stalls, and muses over what she can possibly do with them.  Many of the scenes which Stevenson has woven in are almost farcical, and there is one faux pas after another at many points in the novel.

The characters which Stevenson has created are all interesting and unpredictable, and there is not a dull person amongst them.  Everyone is likeable, or at least admirable, in their different actions and mannerisms.  It is rather refreshing to read a novel which veers off in unexpected directions as The Two Mrs Abbotts does, and the twists within its plot work marvellously.  The arc of events throughout is well paced, as is the introduction of characters.  Stevenson writes about social aspects rather wonderfully, from the importance of and reliance which one can have upon the wider community, to the problems which evacuees encounter when living away from home.

It is not necessary to have read the first two books which focus upon Barbara’s life, and no information which is important to the story within The Two Mrs Abbotts has been omitted.  The entirety of the book is quaint, amusing and rather lovely.  It is a light, easy read which is certain to appeal to anyone who enjoys fiction written or set within the first half of the twentieth century, and is certainly a great addition to the Persephone list.