Another Book Trail is in place for today’s post; in it, our starting point is a highly anticipated book upon my to-read shelf.  As ever, we find some interesting tomes along the way, all of which are related to cartography.  Have you read any of these?  Which pique your interest the most

1. The Map That Changed the World by Simon Winchester

‘William Smith was not rich or well-connected, but his passion for rocks and fossils, and his 20-year obsession with single-handedly mapping the geology of Britain made him one of the most significant men of the 19th century. But his vision cost him dear – his wife went mad, his work was stolen by jealous colleagues who eventually ruined him, and he was imprisoned for debt. Simon Winchester tells the fascinating story of ‘Strata’ Smith, a man who crossed boundaries of class, wealth and science, to produce a map that fundamentally changed the way we view the world.‘ 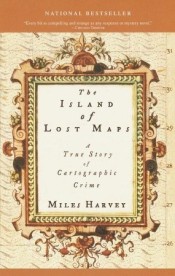 2. The Island of Lost Maps: A True Story of Cartographic Crime by Miles Harvey
‘The Island of Lost Maps tells the story of a curious crime spree: the theft of scores of valuable centuries-old maps from some of the most prominent research libraries in the United States and Canada. The perpetrator was Gilbert Joseph Bland, Jr., an enigmatic antiques dealer from South Florida, whose cross-country slash-and-dash operation had gone virtually undetected until he was caught in 1995â€“and was unmasked as the most prolific American map thief in history. As Miles Harvey unravels the mystery of Blandâ€™s life, he maps out the world of cartography and cartographic crime, weaving together a fascinating story of exploration, craftsmanship, villainy, and the lure of the unknown.‘

3. The Mapmakers by John Noble Wilford

‘In his classic text, two-time Pulitzer Prize—winner John Noble Wilford recounts the history of cartography from antiquity to the space age. With this revised edition, Wilford brings the story up to the present day, as he shows the impact of new technologies that make it possible for cartographers to go where no one has been before, from the deepest reaches of the universe (where astronomers are mapping time as well as space) to the inside of the human brain. These modern-day mapmakers join the many earlier adventurers–including ancient Greek stargazers, Renaissance seafarers, and the explorers who mapped the American West–whose exploits shape this dramatic story of human inventiveness and limitless curiosity. ‘

4. Names on the Land: A Historical Account of Place-Naming in the United States by George R. Stewart
‘George R. Stewart’s classic study of place-naming in the United States was written during World War II as a tribute to the varied heritage of the nation’s peoples. More than half a century later, Names on the Land remains the authoritative source on its subject, while Stewart’s intimate knowledge of America and love of anecdote make his book a unique and delightful window on American history and social life.  Names on the Land is a fascinating and fantastically detailed panorama of language in action. Stewart opens with the first European names in what would later be the United States—Ponce de León’s flowery Florída, Cortés’s semi-mythical isle of California, and the red Rio Colorado—before going on to explore New England, New Amsterdam, and New Sweden, the French and the Russian legacies, and the unlikely contributions of everybody from border ruffians to Boston Brahmins. These lively pages examine where and why Indian names were likely to be retained; nineteenth-century fads that gave rise to dozens of Troys and Athens and to suburban Parksides, Brookmonts, and Woodcrest Manors; and deep and enduring mysteries such as why “Arkansas” is Arkansaw, except of course when it isn’t.  Names on the Land will engage anyone who has ever wondered at the curious names scattered across the American map. Stewart’s answer is always a story—one of the countless stories that lie behind the rich and strange diversity of the USA. ‘

5. How the States Got Their Shapes Too: The People Behind the Borderlines by Mark 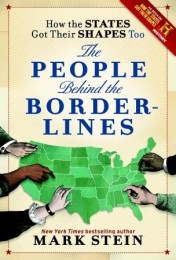 Stein
‘Was Roger Williams too pure for the Puritans, and what does that have to do with Rhode Island?  Why did Augustine Herman take ten years to complete the map that established Delaware?  How did Rocky Mountain rogues help create the state of Colorado?  All this and more is explained in Mark Stein’s new book.  It looks at American history through the lens of its borders, but, while How The States Got Their Shapes told us why, this book tells us who.  This personal element in the boundary stories reveals how we today are like those who came before us, and how we differ, and most significantly: how their collective stories reveal not only an historical arc but, as importantly, the often overlooked human dimension in that arc that leads to the nation we are today.  The people featured in How the States Got Their Shapes Too lived from the colonial era right up to the present.  They include African Americans, Native Americans, Hispanics, women, and of course, white men.  Some are famous, such as Thomas Jefferson, John Quincy Adams, and Daniel Webster.  Some are not, such as Bernard Berry, Clarina Nichols, and Robert Steele.   And some are names many of us know but don’t really know exactly what they did, such as Ethan Allen (who never made furniture, though he burned a good deal of it).  In addition, How the States Got Their Shapes Too tells of individuals involved in the Almost States of America, places we sought to include but ultimately did not: Canada, the rest of Mexico (we did get half), Cuba, and, still an issue, Puerto Rico.  Each chapter is largely driven by voices from the time, in the form of excerpts from congressional debates, newspapers, magazines, personal letters, and diaries.‘

6. Lost States by Michael J. Trinklein
‘Everyone knows the fifty nifty united states—but what about the hundreds of other statehood proposals that never came to pass? Lost States is a tribute to such great unrealized dreams as West Florida, Texlahoma, Montezuma, Rough and Ready, and Yazoo. Some of these states came remarkably close to joining the Union. Others never had a chance. Many are still trying. Consider:

•  Frontier legend Daniel Boone once proposed a state of Transylvania in the Appalachian wilderness (his plan was resurrected a few years later with the new name of Kentucky).
•  Residents of bucolic South Jersey wanted to secede from their urban north Jersey neighbors and form the fifty-first state.
•  The Gold Rush territory of Nataqua could have made a fine state—but since no women were willing to live there, the settlers gave up and joined California.

Each story offers a fascinating glimpse at the nation we might have become—along with plenty of absurd characters, bureaucratic red tape, and political gamesmanship. Accompanying these tales are beautifully rendered maps detailing the proposed state boundaries, plus images of real-life artifacts and ephemera. Welcome to the world of Lost States!‘

7. Strange Maps: An Atlas of Cartographic Curiosities by Frank Jacobs

‘An intriguing collection of more than one hundred out-of-the-ordinary maps, blending art, history, and pop culture for a unique atlas of humanity.  Spanning many centuries, all continents, and the realms of outer space and the imagination, this collection of 138 unique graphics combines beautiful full-color illustrations with quirky statistics and smart social commentary. The result is a distinctive illustrated guide to the world. Categories of cartographic curiosities include Literary Creations, featuring a map of Thomas More?s Utopia and the world of George Orwell’s 1984.‘ 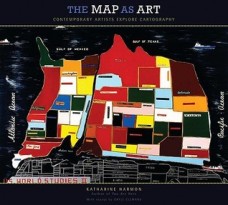 8. The Map as Art: Contemporary Artists Explore Cartography by Katharine Harmon
‘Maps can be simple tools, comfortable in their familiar form. Or they can lead to different destinations: places turned upside down or inside out, territories riddled with marks understood only by their maker, realms connected more to the interior mind than to the exterior world. These are the places of artists’ maps, that happy combination of information and illusion that flourishes in basement studios and downtown galleries alike. It is little surprise that, in an era of globalized politics, culture, and ecology, contemporary artists are drawn to maps to express their visions. Using paint, salt, souvenir tea towels, or their own bodies, map artists explore a world free of geographical constraints.‘

One thought on “The Book Trail: The Cartographer’s Edition”