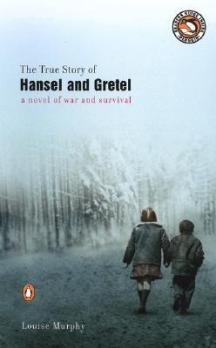 I am drawn to stories set during the Second World War, particularly when those stories are involved with survival.  I will read anything to do with this topic, from the diaries of those who hid from captors, to fictional accounts of the ways in which both capture and death could be evaded.  I also love fairytales, and modern day adaptations of old favourites.  I had therefore had my eye upon Louise Murphy’s The True Story of Hansel and Gretel for quite some time, and began it as soon as I had procured a copy.

Throughout, I found the novel incredibly powerful – unsettling so at times.  The sense of place and atmosphere which Murphy built up were truly stunning.  I loved the way in which she transferred the fairytale to a believable historical setting – World War Two in Poland, where two young children – renamed Hansel and Gretel by their father so that they appear to be more German – are left in the woods.  They soon come across the house of an elderly lady named Magda, who is purported to be the town’s ‘witch’.

Throughout, Murphy has successfully brought some of the horrors of the Holocaust back to life, and she describes the struggle for survival which Hansel and Gretel and their new family endure so poignantly.  Each scene, particularly with regard to the darker ones, were incredibly vivid.

The author has created a wonderfully crafted and memorable tale, which I found very difficult to put down.  Murphy’s ideas were so clever throughout, and the original tale woven in so cleverly, that I am hoping she will continue the theme of updating fairytales, making them fit into both our generation and our history.

One thought on “One From The Archive: ‘The True Story of Hansel and Gretel’ by Louise Murphy ****”