A Hundred and One Days: A Baghdad Journal is the third of Seierstad’s books which I have read to date, and has been translated from the Norwegian by Ingrid Christophersen.  This particular reportage comes from Iraq, where Seierstad stayed for over three months in the beginning of 2003.  A Norwegian award-winning journalist, she had been sent to the country in order to report upon the war and its aftermath; she arrives before said war, and is able to report upon the state of politics, and the way of life for the city’s citizens.  The book’s blurb reads that ‘her passionate and erudite book conveys both the drama and the tragedy of her one hundred and one days in a city at war’. 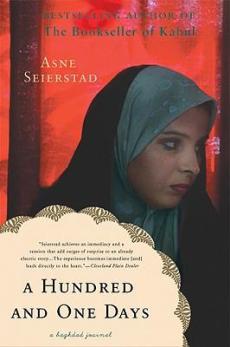 I was in my early years of secondary school when the Iraq war broke out.  Whilst I remember much of the reportage, and the horrors which it conveyed, I do not feel as though I was given much of an idea about how awful it must have been to live, and to try to survive, in the country at the time.  I haven’t read much about Iraq from a retrospective position, but felt that it was an important thing to do.

In A Hundred and One Days, Seierstad brilliantly details the frustrations and dangers which journalists worldwide faced in trying to uncover the truth behind the all-pervasive propaganda of the regime.  She is humble with regard to her account: ‘No story contains the whole story.  This is just one of many and it gives a fragment of the whole, not more.’  She demonstrates what a hold propaganda had upon the country, and also shows the new, brave breed of people, who wanted to remain anonymous, but found it important to tell her the truth about what they were living through.  She writes, ‘Iraq has become a country of schizophrenics and cowards, a country where people fear their friends, their family, their own children.  Once upon a time Iraq was the lighthouse of the Middle East, but thirty years of Oriental Stalinism and twelve years of embargoes has crushed the country and its people’.

The book’s translation is rather Americanised, and I must admit that I found a few of the past participles and such used rather jarring.  The writing itself wasn’t as good as I have come to expect from Seierstad either; I remember her being rather eloquent in The Bookseller of Kabul, and One of Us, her reportage of Anders Breivik and the Oslo massacre he perpetrated, is incredibly strong with regard to its prose.

At first, the book failed to grip me.  Some of the paragraphs in the initial section were incredibly interesting, but others felt too drawn out, and there was no real sense of cohesion to the whole.  As other reviews have mentioned, much emphasis is placed upon office bureaucracy; whilst obviously pivotal for Seierstad, to allow her to extend her stay in the country, this did not seem overly useful on the whole for the general reader.  Some of the extended interviews also seem to have been cut a little short, or repeat almost entirely the details of others.  Once I had read past the first fifty pages, however, I found the book incredibly compelling.  There was some clumsy phrasing at times, but it was largely rather a fluid piece.  The inclusion of original newspaper pieces was beneficial to the whole, and largely they flowed seamlessly from the main body of prose.

A Hundred and One Days is a fascinating, thorough, and honest portrait of a wartorn city, and whilst it is not my favourite piece of Seierstad’s longer journalistic pieces, it is certainly an important book to read in order to understand the reasoning behind and conditions of the war.

One thought on “Reading the World 2017: ‘A Hundred and One Days: A Baghdad Journal’ by Asne Seierstad ****”