I shall begin this review by saying that I am an enormous admirer of Sylvia Plath’s work.  I was utterly spellbound by The Bell Jar and her poetry as a teenager, and never wanted her diaries and Letters Home to end.  I have read a fair amount of biographical criticism relating to Plath, but interestingly, Mad Girl’s Love Song is the only one which I have come across that deals solely with her early life; as Plath deemed it, ‘the complex mosaic of my childhood’.  A wealth of information has been contained here about her childhood, some from ‘previously unavailable archives’.  Wilson has chosen to draw on primary materials rather than other biographies; thus, any conclusions which he draws are essentially his own.

Wilson has linked almost every single one of Plath’s childhood memories to one or more of her poems; here, he writes particularly intelligently.  Throughout, his prose style is enjoyable.  A strength in Mad Girl’s Love Song lies in the psychological standpoint, which is both strong and fascinating.  I loved reading about the effects which certain books had upon Plath, and the criticism of The Bell Jar, much of which I hadn’t come across before.  As always, I very much enjoyed the accounts of Plath’s life in Cambridge, my home city. 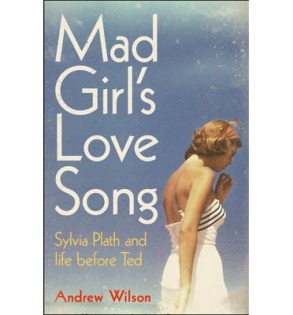 I have a slight issue with the way in which Wilson categorically states that he will take no other Plath biographies into account.  Surely to create a full picture of the author in his mind, he must have read at least a handful of her biographies in the past, and one surely cannot part with the conclusions of other experts so easily as he claims to do.  In terms of Plath scholarship, I do not feel as though the book adds a great deal of new or previously unknown information.  There are many anecdotes included within the pages of Mad Girl’s Love Song which I have read before, which takes a certain freshness away from his endeavour.

Still, one cannot argue with the fact that the scope here is vast, and that Wilson has been respectful in his handling of the material.  Ultimately, Plath was a fascinating woman, and no account of her could really be dull.  I cannot help but compare it to my favourite Plath biography to date, Bitter Fame by Anne Stevenson, which I feel is incredibly thorough and invigorating, and also takes the whole of Plath’s life into account.  Whilst Wilson’s approach is interesting, I do not feel as though the sheer depth of Plath has been reached.  I must take issue with the afterword though; at only two pages long, I honestly feel as though the book would have been far better had Wilson not skipped over so many important details and ‘neatly’ summed up her suicide.

One thought on “‘Mad Girl’s Love Song: Sylvia Plath and Life Before Ted’ by Andrew Wilson ***”