One of my favourite things to learn about during my MA lessons was ‘The New Woman’, a feminist idea which emerged in the late nineteenth century, and inspired feminism and women’s movements during the twentieth century.  They were free spirited, and shunned the Victorian ‘Angel of the House’ ideal, eschewing marriage in favour of careers and independence. 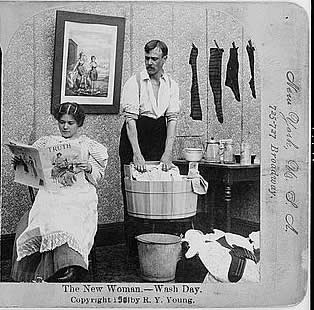 ‘The New Woman on Wash Day’ – R.Y. Young (from The Library of Congress)

The New Woman is an endlessly fascinating subject for those of us who are interested in female social history and the like.  I thought that I would put together a little reading list for everyone who is interested in reading about The New Woman, or just fancies trying something a little different.

Firstly, we shall begin with two social history books, and will then go on to some depictions of The New Woman in literature.

The New Woman: Fiction and Feminism at the Fin-De-Siecle by Sally Ledger
‘By comparing the fictional representations with the lived experience of the new woman, Ledger’s book makes a major contribution to an understanding of the ‘woman question’ at the fin de siecle. She alights on such disparate figures as Eleanor Marx, Gertrude Dix, Dracula, Oscar Wilde, Olive Schreiner and Radclyffe Hall. Focusing mainly on the last two decades of the nineteenth century, the book’s later chapters project forward into the twentieth century, considering the relationship between new woman fiction and early modernism as well as the socio-sexual inheritance of the ‘second generation’ new woman writers.’

‘Following on her history of the women’s movement in America that took the story to 1876, Jean Matthews’s new book chronicles the changing fortunes and transformations of the organized suffrage movement, from its dismal period of declining numbers and campaign failures to its final victory in the Nineteenth Amendment that brought women the vote. Ms. Matthews’s engaging narrative recaptures the personalities and ideas that characterized the movement in these years. She draws deft portraits and analyzes the intellectual currents-in politics, the economy, sexuality, and social thought-that competed for women’s commitment. And she shows how new leadership and new strategies at last brought success in the long struggle during which many feminist leaders had grown old. The Rise of the New Woman emphasizes the historical contexts, including progressivism, in which the women’s movement operated; the disputes and tensions within the movement itself; and the perennial question of who was to be included and excluded in the quest for women’s rights. It also considers the often baffling aftereffects of the 1920 constitutional victory, when women found themselves wondering what to do next.’ 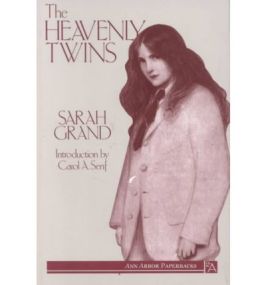 The Heavenly Twins by Sarah Grand
‘Sarah Grand’s dual novel of the diabolically mischievous twins Diavolo and Angelica and the coming of age of nineteen-year-old Evadne valiantly explores subjects considered taboo for a female writer of the Victorian age. Through her characters, Grand, considered one of the “New Woman” writers of the late 1800s, courageously advocated “rational dress,” financial independence, personal fulfillment over marriage and motherhood, and the freedom of women to initiate sexual relationships outside of wedlock and to openly discuss such volatile sexual topics as a woman’s right to contraception. She was one of the first to explore the complexity of gender roles and their inherent constraints.’

A Doll’s House by Henrik Ibsen 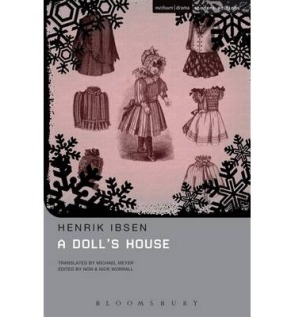 ‘The slamming of the front door at the end of A Doll’s House shatters the romantic masquerade of the Helmers’ marriage. In their stultifying and infantilised relationship, Nora and Torvald have deceived themselves and each other both consciously and subconsciously, until Nora acknowledges the need for individual freedom. A revised student edition of classic set text: A Doll’s House (1879), is a masterpiece of theatrical craft which, for the first time portrayed the tragic hypocrisy of Victorian middle class marriage on stage. The play ushered in a new social era and “exploded like a bomb into contemporary life”.’

The Story of an African Farm by Olive Schreiner
‘A searing indictment of the rigid Boer social conventions of the 19th century, the first great South African novel chronicles the adventures of 3 childhood friends who defy societal repression. The novel’s unorthodox views on religion and marriage aroused widespread controversy upon its 1883 publication.’ 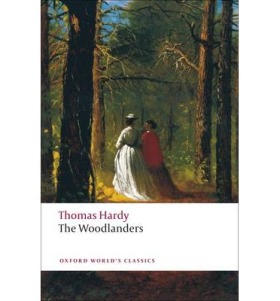 The Woodlanders by Thomas Hardy
‘Love, and the erratic heart, are at the centre of Hardy’s ‘woodland story’. Set in the beautiful Blackmoor Vale, The Woodlanders concerns the fortunes of Giles Winterborne, whose love for the well-to-do Grace Melbury is challenged by the arrival of the dashing and dissolute doctor, Edred Fitzpiers. When the mysterious Felice Charmond further complicates the romantic entanglements, marital choice and class mobility become inextricably linked. Hardy’s powerful novel depicts individuals in thrall to desire and the natural law that motivates them.’

The Odd Women by George Gissing

‘The idea of the superfluity of unmarried women was one the ‘New Woman’ novels of the 1890s sought to challenge. But in The Odd Women (1893) Gissing satirizes the prevailing literary image of the ‘New Woman’ and makes the point that unmarried women were generally viewed less as noble and romantic figures than as ‘odd’ and marginal in relation to the ideal of womanhood itself. Set in grimy, fog-ridden London, these ‘odd’ women range from the idealistic, financially self-sufficient Mary Barfoot and Rhoda Nunn, who run a school to train young women in office skills for work, to the Madden sisters struggling to subsist in low-paid jobs and experiencing little comfort or pleasure in their lives. Yet it is for the youngest Madden sister’s marriage that the novel reserves its most sinister critique. With superb detachment Gissing captures contemporary society’s ambivalence towards its own period of transition. The Odd Women is a novel engaged with all the major sexual and social issues of the late-nineteenth century. Judged by contemporary reviewers as equal to Zola and Ibsen, Gissing was seen to have produced an ‘intensely modern’ work and it is perhaps for this reason that the issues it raises remain the subject of contemporary debate.’