Kirsty Logan is a Scottish author for whom I’ve been hearing so many things around the bookish internet lately. Her first novel, The Gracekeepers, was published last year in a beautiful hardcover edition and the paperback, which I own, came out a couple of months ago. Most of the reviews and opinions on this book and Logan’s storytelling abilities in general, which I had encountered prior to purchasing this book, were more than enthusiastic, so I was very much looking forward to reading this. 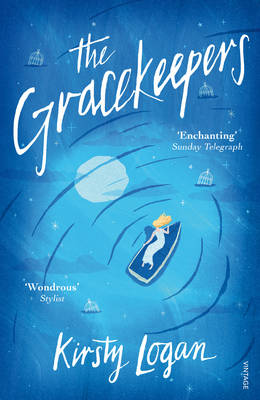 I find it rather difficult to describe The Gracekeepers giving it the justice it deserves, but I will do my best. The story is set in a world where land is scarce and there are some people, called damplings, who spent all their lives on boats at sea and cannot fathom life on land. There is an array of different characters presented in the book, but the two main ones are Callanish, a girl who has undertaken the task of a gracekeeper (they take care of some birds which are used in funerals) and North, a girl who works and travels with a floating circus along with her bear. We follow their stories separately at first, and we get to know their characters and the circumstances surrounding them.

North’s circus consists of many other characters such as Jarrow or Red Gold, the circus master, Avalon, his wife who dislikes the circus and longs for a quiet life on land, Ainsel, Jarrow’s son, as well as many other acrobats, clowns and so on. Each chapter is written from the perspective of a different character (but it’s still a third-person narration), with more emphasis given on Callanish and North. I found this constant change of perspective quite confusing and unnecessary at first, since some chapters present the point of view of very minor characters, but some important information was given to the reader through these perspectives, since lies and deception are dominant characteristics of most characters in this novel, to the point where it became very hard to distinguish the truth.

As far as the plot is concerned, I found it very intriguing and unique and it certainly kept my interest piqued until the very last page. The story was filled with twists and certain turn of events were more than surprising. Logan’s writing was beautiful and lyrical throughout the novel and she definitely managed to create a whimsical and heart-breaking tale. What stood out the most for me, though, apart from the beautiful language, were the characters. She managed to craft such complicated and multifaceted characters, who could easily reflect any people from our lives. Especially Avalon, was one of those characters who I immediately disliked and whose actions only added more reasons for me to feel that way towards her. However, through the different perspectives, I had the opportunity to learn more about her motives and reasons why she acted the way she did, and even though I still disliked her, I felt like she had a solid background and wasn’t merely unnecessarily mean.

The only thing which prevented me from giving this book five stars was the ending. Well, perhaps not the ending itself, but rather some of the subplots which were left hanging and unwrapped up, with only some indications provided as to what may happen. Nevertheless, this was a book I wholeheartedly enjoyed and, being the very first book I read in June, I felt like it was the ideal book to start my summer with. I’m more than looking forward to devouring more of Kirsty Logan’s writing now.

Have you read The Gracekeepers or any other book by Kirsty Logan? I’d love to hear your opinions 🙂