Sayed Kashua is an Israeli-Arab writer and journalist who was born in Israel but is currently residing in Jerusalem and writes in Hebrew. Native is a collection of many different essays of various lengths and topics, which were originally written for the newspaper the author works for. Kashua is mostly known for his humorous writing and that is an element that was present throughout this book. 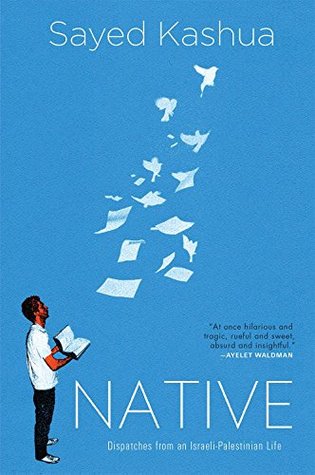 Native is a book brimming with the author’s wit, sarcasm and poignant point of view. His thematology is quite broad, as he covers issues such as discrimination, freedom of speech, his daily life, his life as a reporter and even some family moments (much to his wife’s dismay). All the stories he tells come from his personal experiences and that adds a very personal but also authentic tone to the essays, in my opinion. Being completely unaware of the situations and lifestyle of people living in Jerusalem, I had the opportunity to take a glimpse into it through Kashua’s essays.

The book opens in quite an original and unexpected way; with a letter written by the author’s wife, in which she claims that the version of herself and their kids which appear in Kashua’s articles is very distorted and purposefully made much meaner for the sake of creating drama for his readers. I found this a very interesting way to begin this book, as it definitely caught my interest and made me much more aware of the way Kashua presented the people that appeared in his stories and their overall attitudes.

One essay that really stood out for me is the one where the author recounts his receiving a complaint by one of his readers about the content of his newspaper column. That said reader claimed that since he (the author) wasn’t censored by anyone, he could write about anything he wanted and express his political opinions freely, and yet he chose to write about trivial everyday things. Kashua describes how this comment affected him in such a degree that he contacted this reader immediately and seeked advice for the content of his essays from him. The author manages to encompass sarcasm, political and social commentary and his personal experiences in a such a short but powerful piece of writing.

Kashua’s writing was delightful and easy to read. I believe the translator did a very good job as well, since the text flowed very smoothly, with no real sense of detachment or foreignness. However, I had the impression sometimes that his essays finished too abruptly and that they were missing their point, or that no real meaning was attached to the stories.

It was my first time reading such a diverse author and I certainly enjoyed the experience.