Angela Thirkell’s Pomfret Towers, first published in 1938, is the 589th book on the Virago Modern Classics list, and is the sixth novel in the Barsetshire Chronicles series.  In Pomfret Towers, the young female protagonist ‘finds adventure during a Friday-to-Monday at a grand country house in this classic, deliciously diverting 1930s romantic comedy’.  The Lady magazine calls it ‘a perfect balance of satirical observation and chocolate-box charm’. 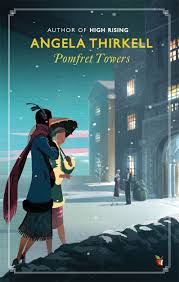 Pomfret Towers is the seat of the Earls of Pomfret in the fictionalised county of Barsetshire.  The blurb states that the Towers ‘makes a grand setting for a house party at which gamine Alice Barton and her brother Guy are honoured guests…  But of all the bright young things, whose hand will Mr Foster [Giles Foster, nephew and heir of the present Lord Pomfret] seek in marriage, and who will win Alice’s tender heart?’  At these very words, it is almost possible to hear fans of Virago-esque novels swooning.

Much of the novel takes place over a single weekend.  Thirkell sets her scene by opening the book with a history of ‘the most delightful town’ of Nutfield, which can be found on the Pomfret estate.  We are introduced to the Barton family, residents of the town, almost immediately.  Patriarch Mr Barton ‘was a passionate lover and faithful guardian’ of the Jacobean house in which his family live; his wife writes historical novels and consequently ‘sometimes found it difficult to remember where she was’; and their son Guy ‘had inherited his mother’s good looks, together with his father’s peaceful temperament, [and] found life a very straightforward, pleasant affair’.  The young girl of the family, Alice, is first referred to as ‘delicate’.  She longs to be an architect but, ‘failing this, she found solace in painting’.

Alice and Guy have been asked to Pomfret Towers to attend the party which is being thrown.  She is reluctant to spend time in unknown company, and is adamant that she will not go under any circumstances.  Rather predictably, her mind is changed only when friends of the siblings, Sally and Roddy, speak of their wish to be present at the gathering.  Still, her timidity is well outlined, and Thirkell describes the way in which she is frightened of almost everything: with dogs, she finds the ‘loud, indiscriminating hospitality [of dogs]… rather overpowering’, and at the thought of spending two whole days away from home with strangers, our omniscient narrator says, ‘if there were to be girls, Alice thought she had better die.  They would all have wonderful dresses and exquisite shoes, and be permanently waved and made up, and be frightfully clever and know all about people and theatres and films, and despise one, and why couldn’t Mother understand that girls of one’s own age were simply the most awful thing one could be asked to face’.  The urgency of her language and the way in which it runs on at such points within the novel is a great tool to exemplify Alice’s building fear.

Many other characters come into the narrative as it progresses, from the lovely and kind, to the utterly indifferent.  Lord Pomfret himself is portrayed as rather a cold character from the outset, and for good reason: ‘His eyes were small and often looked very angry.  It was so long since his only son, Lord Mellings, had been killed in a frontier skirmish and his wife had decided to be an invalid, that very few people remembered what he used to like’.

During the party, Alice is taken under the wing of Phoebe Rivers, Lord Pomfret’s niece, who had ‘the most elegant legs, the thinnest stockings, and the highest heeled shoes imaginable’.  She attends the parties merely to get away from her novelist mother, Hermione.  Again, rather predictably, Alice rather quickly falls for Phoebe’s pompous and self-important artist brother, Julian.

Alice is such a sweet creature, and she learns an awful lot about herself as the novel progresses.  The situation of the party gives her confidence, and she begins to throw her inhibitions to the wind and flourish.  Her character arc particularly is so believable, and Thirkell treats her with the utmost love and kindness throughout.  The author is unfailingly witty and shrewd, and is as good at describing scenes and situations as she is her characters.  Pomfret Towers is an entertaining novel, which stands alone from the rest of the Barsetshire stories marvellously.

2 thoughts on “One From the Archive: ‘Pomfret Towers’ by Angela Thirkell ***”