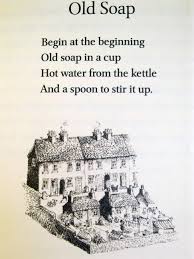 I couldn’t wait to read The Bucket: Memories of an Inattentive Childhood after I spotted three copies in Waterstone’s Piccadilly.  I was fully set to purchase one until I noticed that they were so grubby and bent that I didn’t in the end.  Instead, I checked a copy out of the Cambridge Central Library on a trip there in April.

As I am sure they did with many children, Allan and Janet Ahlberg formed a large part of my early bookishness.  When I saw that Allan had written an autobiography of sorts therefore, I was so very excited.  He is the author of such treasures as Each Peach Pear Plum, Peepo! and Burglar Bill, as well as Please Mrs Butler! and the stunningly adorable The Jolly Postman and The Jolly Christmas Postman, all of which I adore.  The work also begins with a quote from William Maxwell, another author whom I love.

The Bucket is Ahlberg’s recollection of his childhood, a memoir told in both prose and verse.  It details his ‘early enchanted childhod [which was] lived out in a Black Country town in the 1940s’.  His little introduction to the volume is darling.

Each memory which he presents is vivid; he writes of such things as sheltering beneath the kitchen table during bomb raids, of the butcher who dealt ‘in meat and menace’, searching for worms to sell on to fisherman in compost heaps, playing games beneath the clothes horse, his Christmas presents being presented to him in a pillowcase, reminiscences of going to the barber’s, and childhood pageants which he attended.  Each memory is presented as a random fragment, and each little essay is interspersed with a poem.  Ahlberg writes so earnestly.  His prose is lovely, and it continually feels as though he is personally telling each of his readers each story.  The retrospective wisdom which he has made use of works wonderfully.

The book, as one might expect, is filled with the most wonderful illustrations by Janet and Allan Ahlberg and their daughter Jessica, and it also features photographs, photocopies of school reports and documents.  The Bucket is absolutely lovely, and it has made me want to go and revisit all of the Ahlbergs’ work once more.  (Incidentally, I met up with one of my University friends in early April and we read Each Peach Pear Plum together in Waterstone’s, which was great fun!).  Any fan of Allan Ahlberg’s should rush out and purchase (or borrow!) this book, curl up in a comfortable place and enjoy its charm.

One thought on “One From the Archive: ‘The Bucket: Memories of an Inattentive Childhood’ by Allan Ahlberg ****”