It will come as no surprise, I am sure, to say that I have wanted to read Truman Capote’s In Cold Blood: A True Account of a Multiple Murder and Its Consequences for such a long time, and my longing to do so was even higher after the Capote Readathon which Lizzi and I created last summer.  In Cold Blood is the fifth book upon my Classics Club list, and a fitting final read for my American Literature month. A lot of the information within this stunning piece of non-fiction was included in ‘Capote’, a film which I very much enjoyed.  The Spectator describes the book as ‘The American dream turning into the American nightmare…  a remarkable book’, and its blurb heralds it ‘a seminal work of modern prose, a remarkable synthesis of journalistic skill and powerfully evocative narrative’.

Published in 1966 and dedicated to Jack Dunphy and Harper Lee with Capote’s ‘love and gratitude’, In Cold Blood is ‘controversial and compelling’.  It ‘reconstructs the murder in 1959 of a Kansas farmer, his wife and children.  Truman Capote’s comprehensive study of the killings and subsequent investigation explores the circumstances surrounding this terrible crime, as well as the effects which it had on those involved.  At the centre of his study are the amoral young killers Perry Smith and Dick Hickok, who, vividly drawn by Capote, are shown to be reprehensible, yet entirely and frighteningly human’.  All of the material which Capote says is ‘not derived from my own observation’ is taken from official records and interviews ‘conducted over a considerable period of time’. 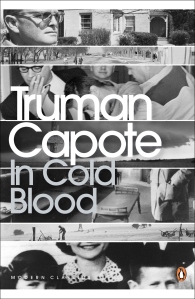 Capote masterfully sets the scene and tone of the whole from the outset: ‘The village of Holcomb stands on the high wheat plains of western Kansas, a lonesome area that other Kansans call “out there”.  Some seventy miles east of the Colorado border, the countryside, with its hard blue skies and desert-clean air, has an atmosphere that is rather more Far West than Middle West.  The local accent is barbed with a prairie twang…  and the men, many of them, wear narrow frontier trousers, Stetsons, and high-heeled boots with pointed toes’.  Holcomb itself is described as ‘an aimless congregation of buildings divided in the centre by the main-line tracks of the Santa Fe Railroad…  After rain, or when snowfalls thaw, the streets, unnamed, unshaded, unpaved, turn from the thickest dust into the driest mud’.

As in his fiction, his depiction and control of every single scene is gripping and vivid.  This is particularly true when he describes the event which was to shake the entire community: ‘But then, in the earliest hours of the morning in November, a Sunday morning, certain foreign sounds impinged on the normal nightly Holcomb noises – on the keening hysteria of coyotes, the dry scrape of scuttling tumbleweed, the racing, receding wail of locomotive whistles.  At the time, not a soul in sleeping Holcomb heard them – four shotgun blasts that, all told, ended six human lives.  But afterwards the townspeople, theretofore sufficiently unfearful of each other to seldom trouble to lock their doors, found fantasy recreating them over and again – those sombre explosions that stimulated fires of mistrust in the glare of which many old neighbours viewed each other strangely, and as strangers’.

The Clutter family – Herbert and Bonnie, and the youngest of their four children, sixteen-year-old Nancy and fourteen-year-old Kenyon – are the victims, all of whom were tied up and shot at close range in their home in 1959.  Descended from German immigrants who moved to Kansas in 1880, they were a prominent and well-respected family in the area, and all were profoundly shocked at their murder: ‘Feeling wouldn’t run half so high if this had happened to anyone except the Clutters.  Anyone less admired.  Prosperous.  Secure.  But that family represented everything people hereabouts really value and respect, and that such a thing could happen to them – well, it’s like being told there is no God.  It makes life seem pointless.  I don’t think people are so much frightened as they are deeply depressed’.  The peripheral characters which Capote makes use of, both in terms of testimony and as part of his beautifully prosaic telling of the murders, are wonderfully and strikingly described.  Local postmistress Myrtle Clare, for example, is ‘a gaunt trouser-wearing, woollen-shirted, cowboy-booted, ginger-coloured, gingery-tempered woman of unrevealed age… but promptly revealed opinions, most of which are announced in a voice of rooster-crow altitude and penetration’.

The rendering of the Clutters’ story is incredibly powerful and resonant, and has been so well sculpted.  Capote has been incredibly clever in that he follows both the victims and the perpetrators, explaining their pasts and the motives of the killers.  He is almost compassionate towards Perry Smith, and this gives an interesting and memorable slant to the whole.  In Cold Blood is distinctly Capote’s work; it rings with such understanding of those involved, without exception.  Real depth has been given to the whole, and it feels as though the reader is watching events unfold when they happen, rather from the position of retrospect.  In Cold Blood is a compelling and important piece of non-fiction, and it has made its way straight onto my favourites list.