I first read Patrick Ness a couple of months ago, when I purchased the beautiful A Monster Calls on Claire at Word by Word‘s recommendation, which I very much enjoyed.  When we at The Literary Sisters were contacted to see if we wanted a review copy of his new novel by Penguin, of course we said yes. 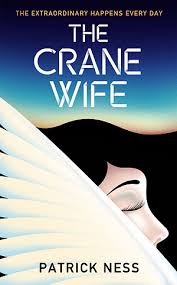 Each time I see the title of The Crane Wife, I find myself inwardly singing a little of the beautiful ‘The Crane Wife 1 & 2′ by The Decemberists.  Imagine my delight then, when I opened this volume and found the very same song – albeit with a different portion of the tune to those which I find myself singing – at its very beginning.  The lyrics sum up the beginning of Ness’ novel perfectly:

The Crane Wife is based upon a Japanese folk tale, which you can read about here.  Ness’ take on it has been branded ‘a tale of passion and sacrifice on the level of dream and myth’.  His novel sets out to imagine ‘how the life of a broken-hearted man is transformed’ when he chooses to rescue a crane which he finds in his garden – ‘a great white bird, as tall as he was, taller, willowy as a reed’ – whose wing has cruelly been shot at with an arrow, which his first task is to remove.  George Duncan, the aforementioned ‘broken-hearted man’, has been living alone for ten years following his divorce.  He is an American man, nearing middle age, and lives in a London suburb: ‘It was in places like this that eternity happened’.

Ness’ turns of phrase are beautiful and startling at times: ‘What actually woke him was the unearthly sound itself – a mournful shatter of frozen midnight falling to earth to pierce his heart and lodge there forever, never to move, never to melt’ is the intriguing way in which it begins.  Sadly though, such sentences are few and far between as soon as the story begins to gather momentum.

Alongside the story of George finding the crane, we are given a rather in-depth consideration of his childhood and early adult life.  Whilst this is interesting and quite amusing at times, its tone detracts from the overall beauty which the novel could have held, were it just about George and the crane.  Because the story flits to George’s past and stays there for large chunks of the novel, it does not feel as though the entirety has been built up as well as it could have been.  The Crane Wife also lacks the beauty of A Monster Calls.  It is an interesting take on the original story, but it is not one which I will personally be urging everyone to go and read.

2 thoughts on “One From the Archive: ‘The Crane Wife’ by Patrick Ness ***”