My first encounter with Keigo Higashino’s works was by watching some adaptations of his novels on Japanese television, and, being a mystery lover already, I fell in love with his witty and subversive plots (my favourite tv show adaptation was “Ryuusei no Kizuna” (also known as “Ties of Shooting Stars”), but sadly the book hasn’t been translated in English – I should polish my Japanese soon so I can read it!). Needless to say, when I came across The Devotion of Suspect X, I ended up purchasing it in a heartbeat. 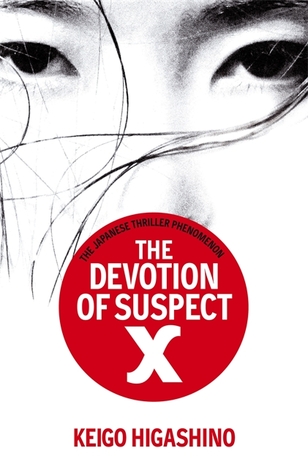 In The Devotion of Suspect X, Detective Kusanagi investigates a crime that is almost too perfect to be true. He seeks the help of Yukawa, a physicist who is incredibly apt to solving such mysteries and cases. This case in particular seems to be of great interest to him, since a former college colleague of his, Ishigami, a mathematician, appears to somehow be involved in this, as he is the neighbour of the prime suspect for this case, Yasuko Hanaoka.

Reading Higashino’s works is so very different from watching it. Taking into account that he is one of Japan’s best-selling authors is an adequate enough argument for the simplicity of his prose. Surely, due to the nature of his books, Higashino uses a lot of jargon from the field of mathematics and physics, but his writing style in general is quite easy to go through.

This book is so different from any other crime or mystery novels I’ve read so far. It’s not like the typical crime novel where you try to find who the culprit is – that’s information that’s already given to you from the very first chapters of the book. It’s also not like most of the Japanese crime novels I’ve encountered before, where you already know who comitted the crime. It is truly about the psychological state of the murderer and how they cope with what they have done more than about the crime itself.

The Devotion of Suspect X combines all these elements and diverts from them at the same time. Having started this book by being absolutely convinced I would adore it, I must admit that I had quite a few moments of doubt whilst reading it. The double perspective of the culprit (who knows everything) and the police investigators (who know but a few things) is certainly interesting, but I couldn’t find how that contributed to the plot overall. Also, I thought that the narrowing down of the suspects by the police came about in a bit of an absolute and sudden manner – one would expect them to investigate a bit further before deciding on pinpointing someone.

All in all, I quite enjoyed this book. It is definitely not one of Higashino’s best and the final plot twist is not as impressive as it would have been if the reader was unaware of the culprit from the set out. Still, it was a fast-paced mystery that makes you question the depth of human relationships and the human psyche more than anything else. The final question that this book will probably leave you pondering is how deeply can a person be devoted to another and in what lengths can this devotion actually lead someone?

I read this book as part of both the Japanese Literature Challenge 9 and the 20 Books of Summer challenge.

13 thoughts on “‘The Devotion of Suspect X’ by Keigo Higashino ***”