When selecting my Classics Club books, I decided to try and include as many as I could from the Virago Modern Classics list which I am also working my way (albeit very slowly) through.  Mary McCarthy’s The Group ticks both boxes, and was also a great choice for American Literature Month.  Sarah Waters deems The Group ‘a brilliant novel’, and Hilary Mantel considers it ‘a masterpiece’ – high praise indeed from two of the most popular contemporary novelists Britain can boast. 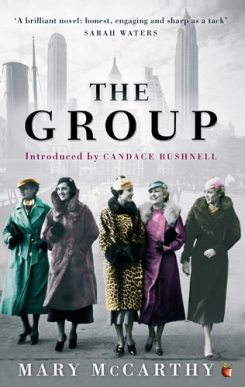 The Group follows eight female graduates from Vassar College ‘as they find love and heartbreak, and choose careers and husbands against the backdrop of 1930s New York’.  Even if it had not been on the Virago list, it would still entirely appeal to me; I was absolutely fascinated by its premise when I began, and was eager to learn about McCarthy’s enduring and highly memorable cast of characters.

The novel was published in 1963.  Candace Bushnell, who has penned the informative and enthusiastic introduction, says that ‘it arrived smack in the middle of a major upheaval in American society.  John F. Kennedy had just been assassinated, the hippies were preaching free love, and the country was four years into the Vietnam War’.  She goes on to say that, ‘The Group reminds us that not much has really changed.  Sex before marriage, lousy men, career versus family – they’re all here…  Given the attention paid to relations between the sexes, it would be tempting to call The Group a forerunner of today’s chick lit.  It’s not.  Although McCarthy’s women struggle with finding “good” men, this is merely window-dressing for a larger conflict.  As Vassar graduates, the women of The Group believe they will change the world.  What they discover is that not only can they not change the world, but their survival still depends on their acceptance of being the second sex’.  Upon its publication, a swathe of women greatly identified with its contents, and it thus enjoyed a firm place upon the New York Times‘ bestseller list for two years.

With The Group, McCarthy wanted to write a ‘serious’ novel; she was a ‘feminist and highly political person’, and this certainly comes across in the cast of characters which she has created.  Bushnell states that: ‘every one of her characters is flawed.  At times they are ambitious, confused, indifferent, terrified, arrogant and catty…  McCarthy doesn’t edit her characters’ personalities to please her readers.  Nor does she stoop to “redeem” her characters; rather she lets her characters’ lives play out to logical and realistic conclusions’.

The novel begins with the marriage of Kay Leiland Strong and Harald Petersen, which occurs in June 1933.  This is a wonderfully simple yet effective background against which to introduce all of the novel’s protagonists at once.  McCarthy deftly captures the initial wedding scene: ‘Paying the driver, smoothing out their gloves, the pairs and trios of young women, Kay’s classmates, stared about them curiously, as though they were in a foreign city.  They were in the throes of discovering New York, imagine it, when some of them had actually lived here all their lives, in tiresome Georgian houses full of waste space in the Eighties or Park Avenue apartment buildings, and they delighted in such out-of-the-way corners as this, with its greenery and Quaker meeting house in red brick’.  Such interesting protagonists manifest – Mary Prothero, known as ‘Pokey’, for instance: ‘She, herself, she proclaimed, hated being fitted for dresses, hated her coming-out party, would hate her wedding, when she had it, which, as she said, was bound to happen since, thanks to Daddy’s money, she had her pick of beaux’.  Her description of Priss Hartshorn, another member of the group, struck me immediately: ‘[she was a] solemn, ashy-haired little girl who looked like a gopher and who felt it her duty to absorb every bit of word-of-mouth information that pertained to consumer problems’.

Socially, too, The Group is fascinating: ‘And elsewhere in the class, in the wider circle of Kay’s friends, they could point out girls of perfectly good background who were going into business, anthropology, medicine, not because they had to, but because they knew they had something to contribute to our emergent America’.  McCarthy demonstrates the changing face of the 1930s – contraception, for instance: ‘The lower classes, for instance, almost never transferred the burden of contraception to the woman; this was a discovery of the middle class’.  Her political and social backgrounds have been well built, and the story is both thoroughly and believably situated.

The fissures within the group creep to the surface rather early on.  McCarthy has wonderfully depicted the smoke and mirrors which exist within such a large group of friends, and this is used to full – and often sad – effect.  Different characters are followed at difficult or pivotal moments in their lives, and each chapter serves as a portrait of sorts to explore one or two of the different women in detail.  The ways in which the separate stories interlink and the characters cross paths is very clever indeed.  McCarthy is an understanding and perceptive author, who has crafted a novel with a wonderful structure and a believable and satisfying ending.  The Group is an incredibly well written and emotionally taut novel, which is easy to get into and most difficult to put down.