I actually read Giovanni’s Room back in February, but thought that it would be a fitting start to my American Literature Month reviews.  My interest in this 150-page novel, which was first published in 1956 in the USA and 1957 in Great Britain, was piqued after seeing Yamini, Katie and Sarah all rave about it on BookTube.

The book’s blurb writes of how ‘this story of a fated love triangle has become a landmark in gay writing, but its appeal is broader.  James Baldwin caused outrage as a black author writing about white homosexuals, yet for him the issues of race, sexuality and personal freedom were eternally intertwined’.  The introduction to the Penguin Modern Classics edition which I borrowed from the library has been written by Caryl Phillips.  Whilst I did not read this all of the way through before I began Giovanni’s Room, due to plot spoilers being given away, Phillips, quite rightly, calls the novel ‘audacious… remarkable… elegant and courageous’. 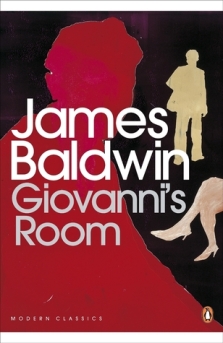 The first person narrative perspective which Baldwin makes use of here is entirely engrossing; our protagonist, David, feels like a tangible being from the very first page.  The initial chilling paragraph drew me in immediately: ‘I stand at the window of this great house in the South of France as night falls, the night which is leading me to the most terrible morning of my life…  I am too various to be trusted.  If this were not so I would not be alone in this house tonight…  And Giovanni would not be about to perish, sometime between this night and this morning, on the guillotine…  I was beginning to think of Giovanni dying – where Giovanni had been there would be nothing, nothing forever’.

David meets Giovanni, a barman, whilst living in Paris, penniless, away from his fiancee Hella, and having just been thrown out of his hotel.  The pair soon become infatuated with one another, and a passionate romance ensues, the majority of which takes place within Giovanni’s small, untidy room: ‘I scarcely know how to describe that room.  It became, in a way, every room I had ever been in and every room I find myself in hereafter will remind me of Giovanni’s room…  It still seems to me that I spent a lifetime there’. The Paris in which the wider story takes place fades away entirely in the presence of Giovanni’s bedroom; its importance for the pair is paramount.

As David tenderly recounts: ‘I think we connected the instant that we met.  And remain connected still, in spite of our later separation de corps, despite the fact that Giovanni will be nothing soon in unhallowed ground near Paris.  Until I die there will be those moments, moments seeming to rise up out of the ground like Macbeth’s witches, when his face will come before me, that face in all its changes, when the exact timbre of his voice and tricks of his speech will nearly burst my ears, when his smell will overpower my nostrils’.  David’s acquaintance, Jacques, has some of the most powerful lines in the story.  He tells David, ‘”Love him…  Love him and let him love you.  Do you think anything else under heaven really matters?  And how long, at the best, can it last, since you are both men and still have everywhere to go?”‘

Baldwin is marvellous at showing how decisions wrangle with David’s conscience throughout.  At first, he says, ‘Each day he invited me to witness how he had changed, how love had changed him, how he worked and song and cherished me.  I was in a terrible confusion.  Sometimes, I thought, but this is your life.  Stop fighting it.  Stop fighting.  Or I thought, but I am happy.  And he loves me.  I am safe.  Sometimes, when he was not near me, I thought, I will never let him touch me again.  Then, when he touched me, I thought it doesn’t matter, it is only the body, it will soon be over.  When it was over I lay in the dark and listened to his breathing and dreamed of the touch of hands, of Giovanni’s hands, or anybody’s hands, hands which would have the power to crush me and make me whole again’.  Then, David goes on to describe the way in which, ‘I saw myself, sharply, as a wanderer, an adventurer, rocking through the world, unanchored.  I looked at Giovanni’s face, which did not help me.  He belonged to this strange city, which did not belong to me.  I began to see that, while what was happening to me was not so strange as it would have comforted me to believe, yet it was strange beyond belief.  It was not really so strange, so unprecedented, though voices deep within me boomed, For shame!  For shame!  that I should be so abruptly, so hideously entangled with a boy; what was strange was that this was but one tiny aspect of the dreadful human tabgle, occurring everywhere, without end, forever.’  David feels intense guilt over being with Giovanni: ‘And no matter what I was doing, another me sat in my belly, absolutely cold with terror over the question of my life’.

Baldwin has packed every single scene with emotion, and the incredibly human elements of his plot rise to prominence throughout: ‘… for that moment I really loved Giovanni, who had never seemed more beautiful than he was that afternoon.  And, watching his face, I realized that it meant much to me that I could make his face so bright…  I felt myself flow towards him, as a river rushes when the ice breaks up…  The beast which Giovanni had awakened in me would never go to sleep again; but one day I would not be with Giovanni any more.  And would I then, like all the others, find myself turning and following all kinds of boys down God knows what dark avenues, into what dark places?’

Giovanni’s Room is an incredibly sad and poignant work.  When, after their three-month separation, Hella returns to Paris, David denies his feelings for Giovanni, as well as his homosexual leanings, in favour of a ‘safe’ future as a married man: ‘She smelled of the wind and the sea and of space and I felt in her marvellously living body the possibility of legitimate surrender’.  The whole has been beautifully written, and is constructed of such cleverly crafted, taut sentences.  The prose is to be savoured; whilst the novel is relatively short, it does take a while to get through in consequence.  Everything has been gorgeously evoked, and Baldwin is incredibly perceptive as to how easy it is for someone to spiral into despair, particularly where matters of the heart are involved.

Such a work smacks of importance, not just for the way in which Baldwin portrays homosexuality, but also due to his writing about such a taboo subject during the turbulent 1950s.  The structure of Giovanni’s Room, and the way in which Baldwin handles the sensitive material, is elegant, and the entirety of the novel is both bold and powerful.  Giovanni’s Room is a novel which cannot – and should not – be easily forgotten.