Knight of the White Hart is the first of a book series called ‘The Breton Lais’. Its story is based on one of Marie de France’s breton lais, called ‘Guigemar’, which is also the protagonist’s name.

The book is merely 137 pages long and it is not divided into chapters, so it gives off the feeling of a really long fairy tale. The plot is centered around Guigemar, a young knight who is really strong and admired for his fighting abilities, but has a rather scornful approach towards love and marriage. Whenever someone mentions falling in love or the prospect of him marrying some lady, Guigemar immediately dismisses it and talks about the futility of love and how much disinterested he is towards such things. 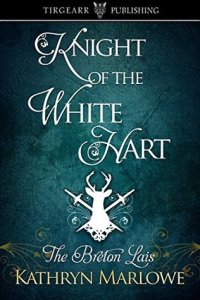 One day, he ventures on a hunting trip, where he accidentally shoots and kills a white hart, while simultaneously hurting himself badly in the foot. Before his last breath, the hart puts a curse on him for injuring it fatally, and that curse is nothing else but for his wound never to heal unless he finds true love. Later on, he is magically transported by a mysterious ship, to a place where a beautiful young woman is held in a state of almost captivity by none other than her husband. The rest, I think, is pretty self-explanatory.

It was really difficult to decide on a rating for this book. Taking into consideration that the plot was not entirely original, since it was based on a breton lais, I cannot comment much on that. The writing, however, was what disappointed me the most. The author chooses some pretty ostentatious vacabulary at certain parts of the story, in an attempt to mimic the style of the era, I presume. This would be absolutely fine, if only she kept this pattern throughout the entire story. During the extensive dialogue and the rest of the prose, there were so many word repetitions that reading the text became quite tiring and tedious. The same expressions were used time and time again, as if there was lack of other words. The characters had tears filling up their eyes constantly and they were saying things with ‘venom’ in their voice all the time.

I found the story severely lacking as well, even though the premise was really intriguing. I understand it was based on something else, so major changes were not possible, but the execution was poor and the story and writing often seemed naive. Also, the characters were very little developed and the world building seemed inadequate. Often, it felt like reading a very raw draft that had not been revised at all.