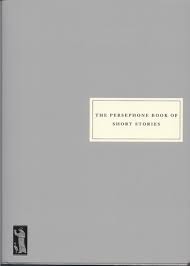 ‘The Persephone Book of Short Stories’

To celebrate Persephone Books’ one hundredth publication, the publishing house have issued a new volume of short stories, all of which have been written by female authors between 1909 and 1986.

Of the included stories, ten are taken from volumes already published by Persephone, ten have been previously featured in their Biannually Magazine, and ten have been ‘selected especially for this collection’. Each tale is ‘presented in the order they are known, or assumed, to have been written’, and the year has been printed after the title and author of every story, which is a rather useful touch. In fact, the entire volume has been very well laid out, with an accessible author biographies section and a well-spaced contents page.

The collection is a wonderfully varied one and features authors from all walks of life. There are many British and American authors, as well as others from further afield – New Zealand-born Katherine Mansfield, Pauline Smith, who spent her childhood in South Africa, Irene Nemirovsky who grew up in Kiev and spent many years in Paris, and Frances Towers, who was born in Calcutta. The Persephone Book of Short Stories begins with Susan Glaspell’s 1909 story ‘From A to Z’ and finishes with Georgina Hammick’s 1986 offering, entitled ‘A Few Problems in the Day Case Unit’.

The stories woven into the collection are as varied as the authors who wrote them. They encompass every aspect of life in their perfectly crafted portraits. There are first jobs, first loves, marriages, affairs, illnesses and death, and these are merely the more obvious themes which float upon the surface.

The protagonist in the beautifully written vignette ‘From A to Z’ by Susan Glaspell is a young girl named Edna Willard, who spent her senior university year ‘hugging to her mind that idea of getting a position in a publishing house’, and is then discontent when this dream is realised. In Pauline Smith’s tale ‘The Pain’, we meet a South African couple who have been married for fifty years, brave in the face of the wife Deltje’s illness. Smith describes the way in which Deltje has ‘a quiet, never-failing cheerfulness of spirit in spite of her pain’, and the story is beautifully and sensitively realised. In E.M. Delafield’s ‘Holiday Group’, we meet a kindly and rather patient reverend, who struggles to take his young and rather demanding family – his wife Julia ‘had gone on being blissfully irresponsible until she was quite grown up’ and has a particularly selfish streak – to the seaside.

Some of the authors in The Persephone Book of Short Stories are more well-known than others, but all share common ground in the way in which they all deserve to be read on a wider scale than they currently are. The balance of longer and shorter stories works incredibly well, as do the differing narrative styles, which range from the third person omniscient perspective to interesting streams of consciousness. Hopefully, this lovely volume of short stories will inspire readers to seek out other novels and short story collections by the authors which they enjoy in this collection. Each story in The Persephone Book of Short Stories is like a small but perfectly formed work of art, and the book is sure to delight a wealth of readers.