Following on from my first and second instalments of my favourite childhood books, I bring you an enormous list.  Rather than add the same gushing comments to each and every book here, I have decided to make a beautifully illustrated list which encompasses more of my favourites.

‘The Minpins’ by Roald Dahl

Alice’s Adventures in Wonderland and Through the Looking Glass, or What Alice Found There by Lewis Carroll
Five Minute Bunny Tales by various authors
Revolting Rhymes, The Witches, The Twits, Matilda, The BFG, The Minpins and James and the Giant Peach by Roald Dahl
The Magic Roundabout by Serge Danot

My Naughty Little Sister series by Dorothy Edwards
The Diary of a Young Girl by Anne Frank
The Dolls’ House by Rumer Godden
Complete Fairytales by the Brothers Grimm
The Mr Men and Little Miss books by Roger Hargreaves
Where’s Spot? by Eric Hargreaves
The Old Bear and Friends series by Jane Hissey
The Kipper series by Mick Inkpen
The Teddy Bears’ Picnic by Jimmy Kennedy
The Mog and Meg series by Judith Kerr
The Tiger Who Came to Tea by Judith Kerr

‘The Tiger Who Came to Tea’ by Judith Kerr 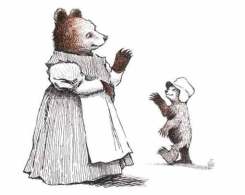 ‘Little Bear’ by Else Holmelund Minarik

Purchase these books from The Book Depository