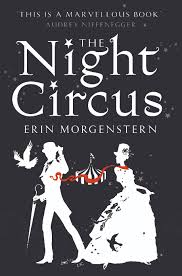 ‘The Night Circus’ by Erin Morgenstern

Before I begin to speak about The Night Circus, I must say that the book itself (I am lucky enough to have the first edition hardback) is a thing of beauty.  Its pages are edged in black, the endpapers and illustrated pages are extremely pretty, and there is even a lovely red ribbon bookmark attached.  It pleases me when so much thought has been put into the aesthetic elements of the book, and this is one of my favourites in terms of design.

The blurb is incredibly enticing:

“The circus arrives without warning. No announcements precede it. It is simply there, when yesterday it was not. Within the black-and-white striped canvas tents is an utterly unique experience full of breathtaking amazements. It is called Le Cirque des Rêves, and it is only open at night.

“But behind the scenes, a fierce competition is underway: a duel between two young magicians, Celia and Marco, who have been trained since childhood expressly for this purpose by their mercurial instructors. Unbeknownst to them both, this is a game in which only one can be left standing. Despite the high stakes, Celia and Marco soon tumble headfirst into love, setting off a domino effect of dangerous consequences, and leaving the lives of everyone, from the performers to the patrons, hanging in the balance.”

I first read The Night Circus last year, and very much enjoyed it.  I love the way in which the novel begins, and Morgenstern sets the scene beautifully.  The way in which she describes the circus is enchanting, and this element strengthens as the novel goes on.  I adore the descriptions of the enchantments which can be found within each tent; they drip with beauty, and Morgenstern has a way of making everything she writes about incredibly vivid.  The Night Circus is an incredibly absorbing book.  It has been plotted in such a way that as soon as one begins to read, a spell of sorts is cast upon them, which makes them want to do nothing but read on.

‘The Night Circus’ sculpture by Rabarama at deviantART

The use of different narrative techniques throughout is done in a skilful manner.  The main thread of the story is written using the third person perspective, and small sections of it use the second person, addressing the reader directly and making them a part of the story.  So many tales have been wondrously woven together, and many characters who are intrinsically linked within the circus come to light as the novel weaves its magic.  The characterisation is sublime.

I found, on my second reading, that I enjoyed it even more than the first.  It has joined my list of treasures, and is a novel which I will come back to again and again.  The Night Circus is beautiful, enchanting and incredibly clever, and the images which it creates will never leave me.